I stayed at the Hey Bear Capsule Hotel for $9/night! For the clean comfy room right by the subway, that deal is amazing anywhere in the world!

Disclaimer: There are affiliate links in this post. I was not paid for this review and I paid $9/night to stay at this capsule hotel in Taiwan.

Even if a room seems like a good deal, I always check a few places online. Nightly rates, taxes and the FINAL price can vary between booking sites. I mainly switch between Agoda and Hotels(com) when making bookings. Agoda has the largest network of hotels in Asia while Hotels(com) has the best rebate and price matching policy.

I ended up booking with Agoda since I was in a last minute situation and they had the lowest price. They both had the same nightly rate, but it was cheaper for a 4-capsule room. Less people generally means MORE quiet.

When the nightly rates are similar, I also go to the booking page to see the FINAL price. Taxes seem to be slightly different between booking companies. I think that’s a strategy just to show you a superficial lower price to entice you to book with them, even though they may not have the lowest price. 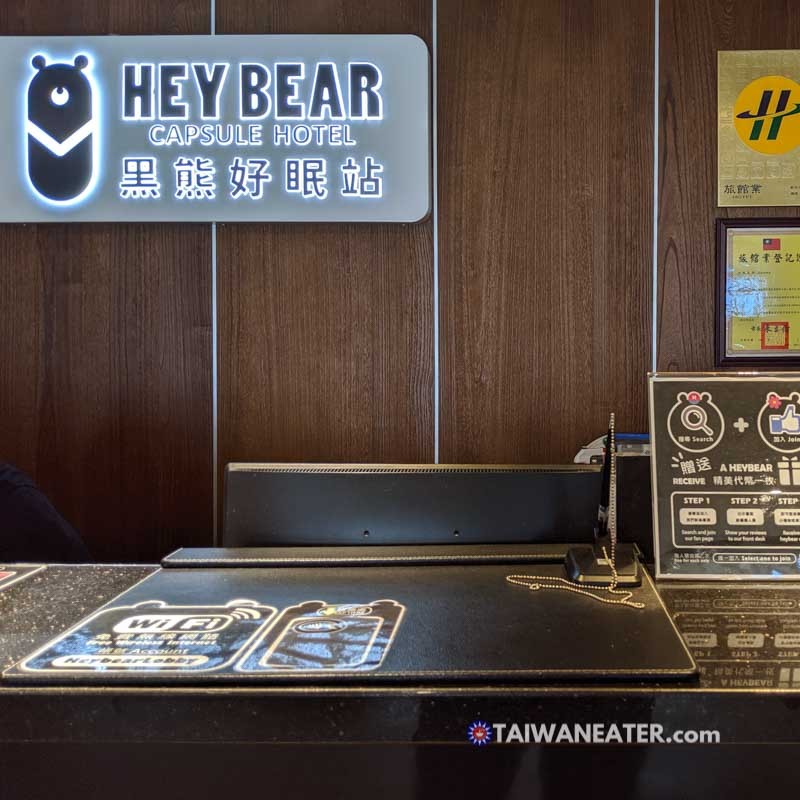 Hey Bear Capsule Hotel is located in New Taipei City, but is only 5-minutes away from the west side of Taipei via subway. You can see the subway station from the lobby! It’s less than a 5-minute walk and super convenient.

With the subway from Hey Bear Capsule Hotel, you can be in Taipei Main Station in about 20-minute and Taipei 101 in 40-minutes. Overall, extremely convenient for the price.

In the area, there’s lots of restaurants and convenience stores. One of my favorite night markets is just a 5-minute walk away! Sanhe night market is massive! Lots of food and shopping. The prices for food are much cheaper than Shilin market since it’s not as touristy…but since it’s not as touristy you won’t see signs in English. For me, that makes things a little more interesting.

Another place in the area is E7Play! It’s Taiwan’s Biggest arcade and you should see my blog post or YouTube video on it if you want to learn more! 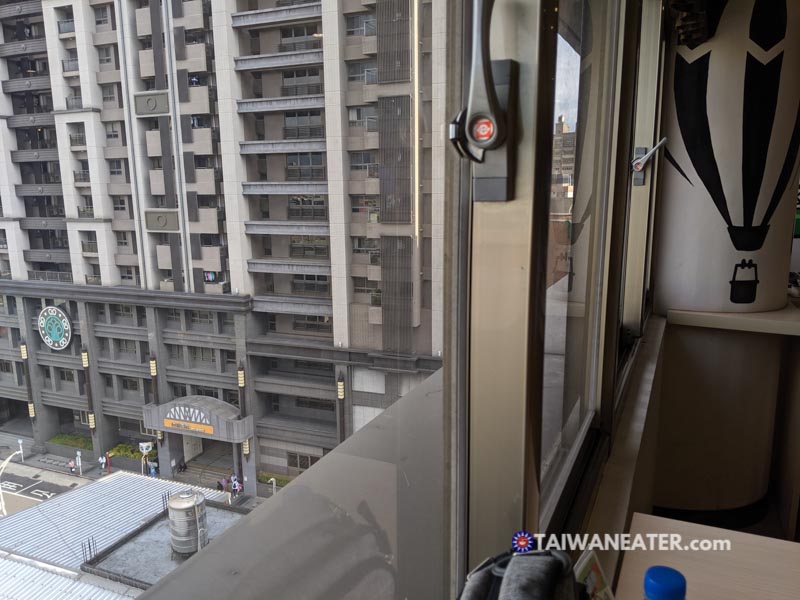 Getting to Hey Bear Capsule Hotel from the Airport

There’s a few options to get to the capsule hotel in New Taipei City from TPE Airport.

#1 Local Train from TPE Airport
The Taipei Airport MRT Local Train to station A2 Sanchong Station. That’s about a 40-minute ride. Then you switch to the local subway station, Sanchong Station to Taipei Bridge Station which is only 5-minutes. Then it’s a short walk to the capsule hotel

You should only use this option if you get to the TPE airport train station and the express train is ready to go. Otherwise using the local train is more convenient.

The hotel lobby is located on the 8th floor of the building. From the outside, you won’t see many signs on the building for this Taiwan capsule hotel, but there’s a few! Look closely and follow Google Maps!https://taiwaneater.com/taipei-airport-layover-guide/ 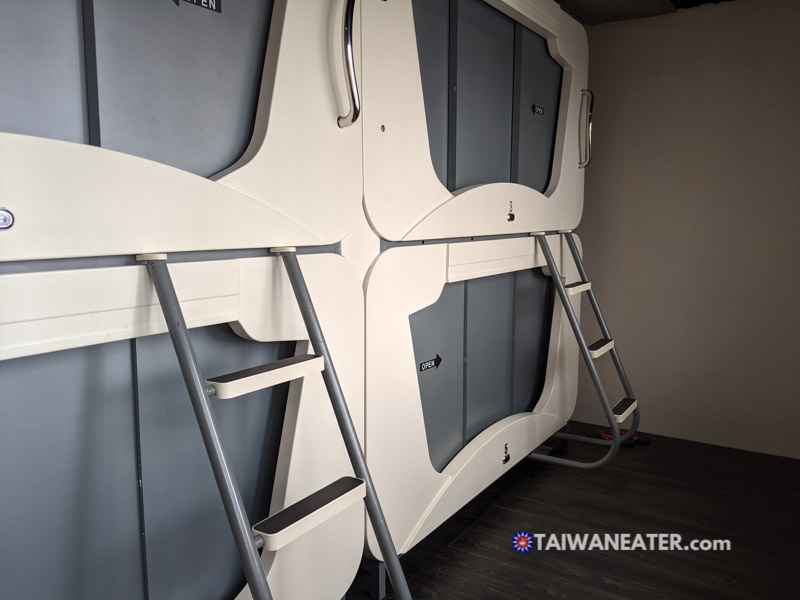 I arrived at Hey Bear Capsule Hotel at 11am. They have a strict 3pm check-in policy so don’t expect early check-in.

That’s what they told me. I then explained my check-in was for yesterday and I showed up 14 hours later than I was expecting because of delayed flights. This allowed me to check-in at 11am.

Getting into the capsule was really cool. I had to scan my key card for the capsule to unlock. This was a nice security feature. Inside the capsule it was clean, bright, spacious and at a very cool temperature!

-Power: 2 USB ports and one outlet.
-There were 4 buttons for different lighting options.
-A sleep mode to turn off all the lights
-Door unlock button
-A/C Vent
-Big HD TV with remote
-1 pillow
-1 warm blanket
-1 foam mattress with bed sheet 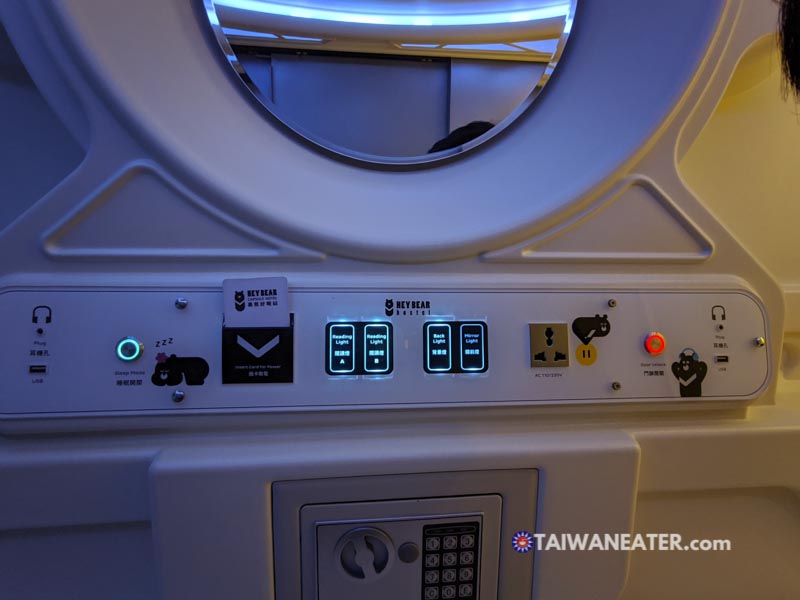 The bed wasn’t that comfortable. It’s a foam mattress, but I think the one I wad was worn out. Maybe I’m too heavy, it’s worn out or they are all like this, but when I was in bed my butt would sink to the flat part of the bed. The foam mattress was completely collapsed under my butt. The rest of my body was comfortable, except for my butt which was on an uncomfortably hard surface. That cause me to move around a lot in my sleep as I was searching for a more comfortable way to sleep. 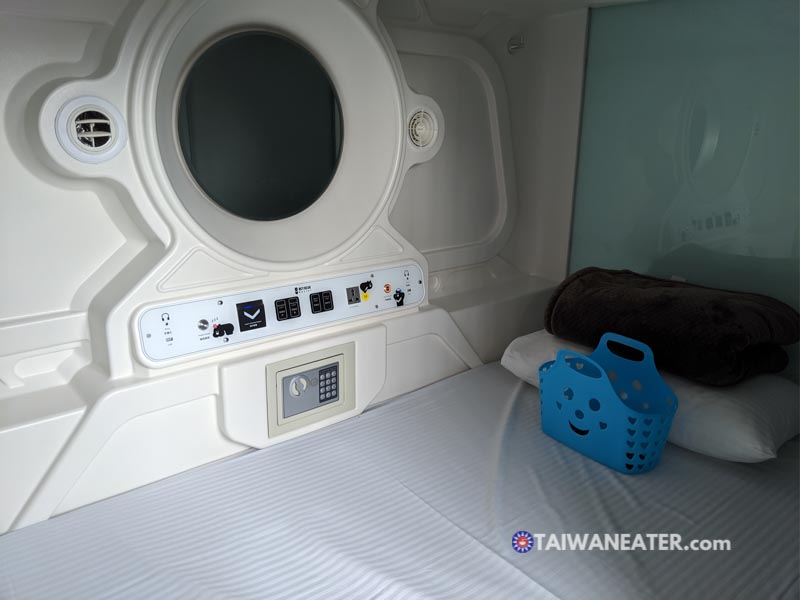 Cleaning The Room
If you’ve ever been to a Japanese capsule hotel before, you know they EVERYONE out between 10am and 3pm. That’s because they clean every capsule. It doesn’t matter if you’re staying multiple nights, you gotta leave the capsule from 10am-3pm for cleaning, but you can hang out in the common areas if you want.

But this is Taiwan! At Hey Bear Capsule Hotel in New Taipei City, they don’t kick you out! I accidentally slept 12 hours cause my watch time was still in the wrong time zone. I thought I woke up at 6am but it was really noon. Initially, I woke up at 7am Taiwan time but my watch said it was 1am so I forced myself to try sleeping.

The bathroom was as clean or cleaner than any hostel I’ve stayed at. The restooms are big shared facilities that also have private showers. The restooms are split between men/women and only accessible by key card.

The toilets available are both western and squat style toilets. Toilet paper is available, they got your rear covered. The toilets aren’t the fancy Japanese bidet style ones common throughout Japan, but they are clean. 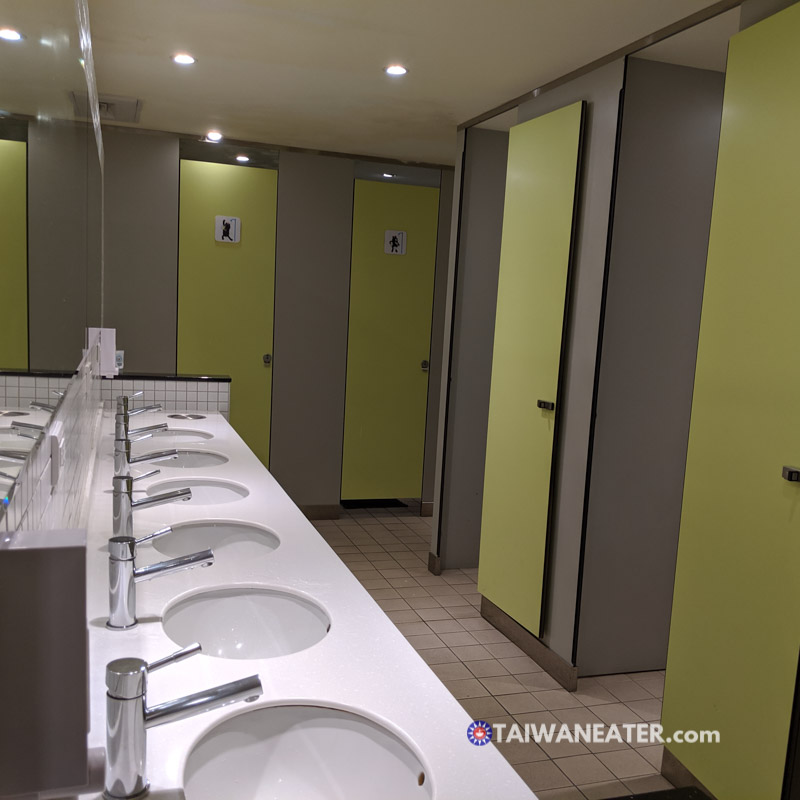 The showers are private and can be accessed within the restroom. Free shampoo and body gel dispensers are in each shower.

In the bathroom, you’ll find soap available by the sinks. What you won’t find is paper towels. You’ll need to bring you’re own towel or purchase one from the front desk. Slippers are also very convenient to have and they are also available for purchase 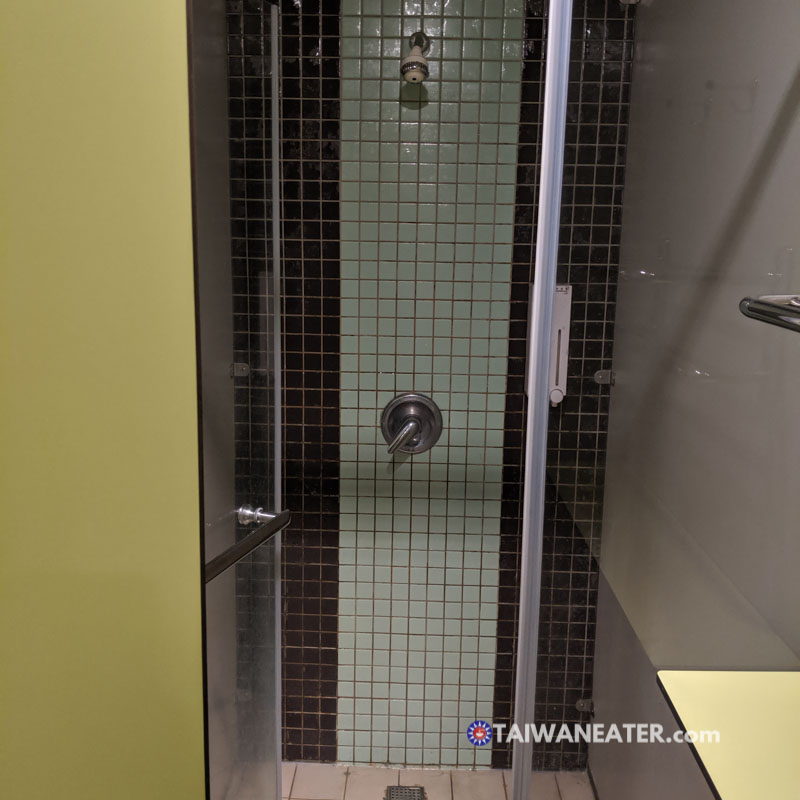 The lockers can only be opened with your keycard. Inside the locker, you’ll find a large space for your small luggage or big backpack. There is a small cubby at the bottom of the locker for your shoes.

This is the most secure capsule hotel I’ve ever been to, in a great way! Your key card gives you access to everything specifically to you!

Your key card is registered to give you access to your floor, the bathroom (registered for male or female, your locker, your room, and your capsule!

This is the first time I’ve seen a secure capsule. Only you can access your capsule so that means you can comfortably leave things in there as needed. There’s that extra peace of mind where you know your stuff is secure.

The lobby isn’t too big, but they make great use of the space. There are several large counters for you to hang out and charge your devices. There are 3 electric outlets on each side of every table. There’s also a few chairs a tables to hang out.

Two computers are available for using the internet if you don’t already have a device.

My favorite feature is that they have 2 emulator arcade systems with a ton of classic arcade video games!

In the lobby you’ll also find coffee, tea eggs, ramen and drinks for sale. All at reasonable prices which are consistent with what you could find at the convenience store.

Restrooms are also available in the lobby! So you don’t have to go back to your floor. 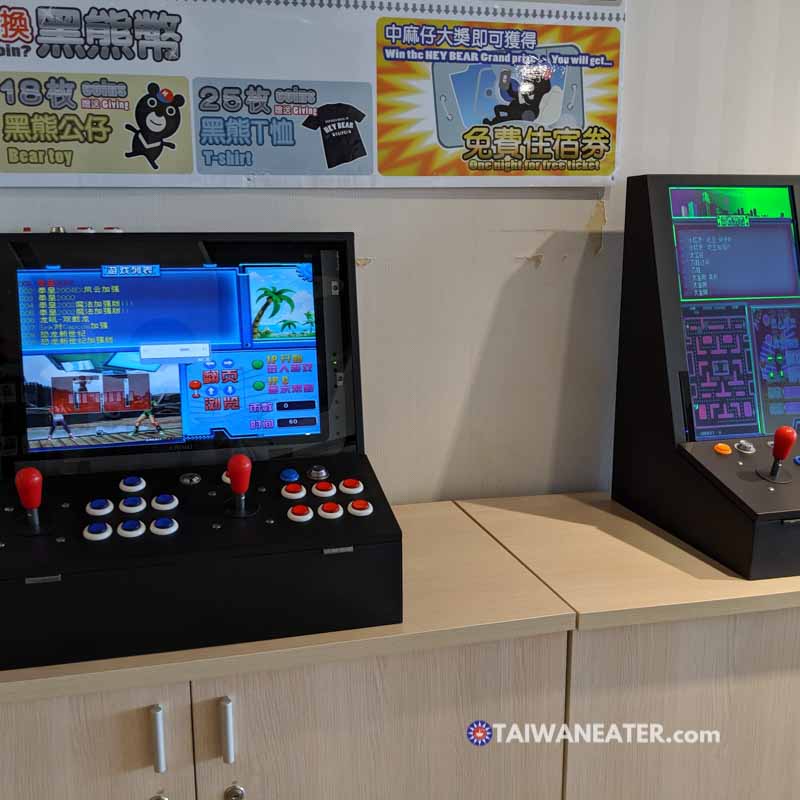 WiFi
The WiFi speed isn’t too bad, clocking in at speed around 7mbps. There isn’t a password for the WiFi and they set up routers in multiple areas of the capsule hotel all with different floor names/room numbers instead of having one cohesive network. That just means you have to switch the connection if you leave the capsule and move in to the lobby. 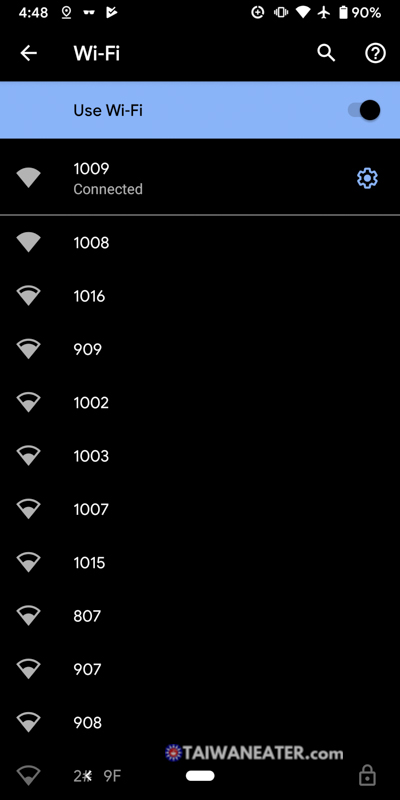 Using laundromats is surprisingly not cheap in Taiwan. There is public laundromat 10 minutes away from Hey Bear Capsule hotel or you can do laundry at the capsule hotel for a little cheaper and a lot more convenient.

Realistically, you’re looking to spend NT$130 (US$4) to do your laundry. I’ve used several laundromats in Taiwan before and that price is still pretty good. 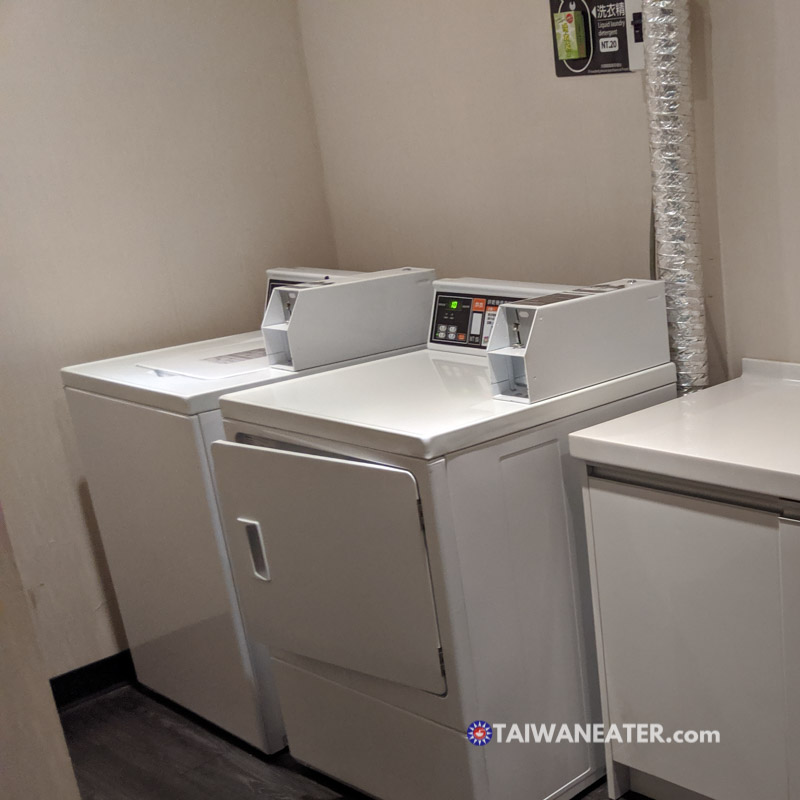 There isn’t a kitchen, but in the lobby you’ll find free hot/cold water. There is a special pantry where you can store your food in a fridge. They only ask that you write the date on your food. 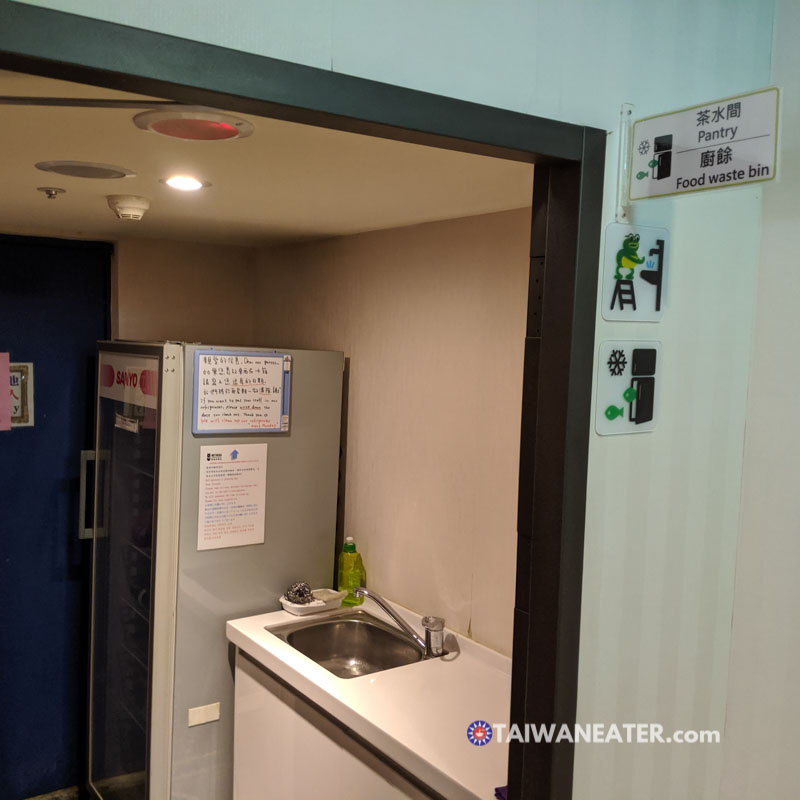 The shop sells a little bit of everything you may need at affordable prices. I bought a small towel for NT$40 and slippers for NT$20. These two items were very needed. You can also get earplugs, combs, toothbrush, shaving utensils, shirts, coffee, ramen, tea eggs, soda, water, beer and more. They have a lot of stuff you may need, otherwise there’s a few convenience stores right around the corner. 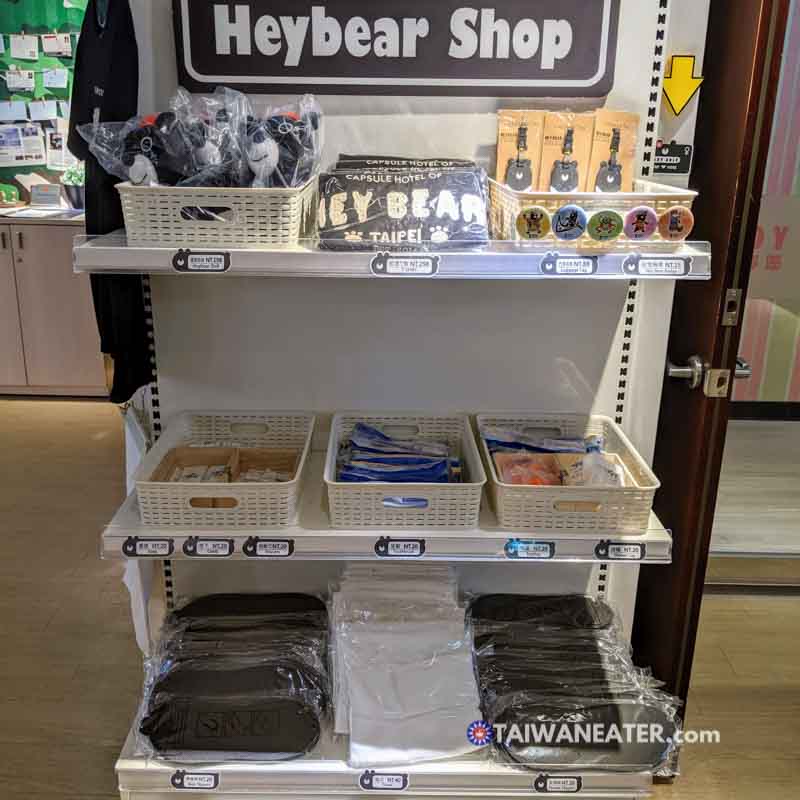 I’ve stayed at a few capsule hotels before, but this was my first time at a capsule hotel in Taipei. The capsule was very modern, clean and secure all for US$9/night! That’s an insane deal. Of course the price slightly goes up if you need to purchase any of the other amenities, but I prefer the lower price! I would absolutely stay in a capsule hotel in Taiwan again.