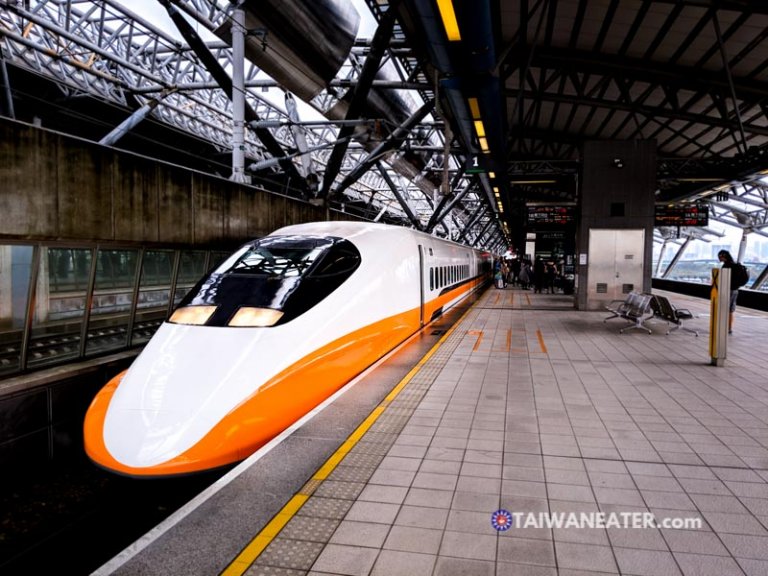 Your full guide on how to get around Taiwan from Taipei’s Airport MRT, subway, bus, Train (TRA), Taiwan High Speed Rail (THSR), Uber, Taxi and rental car/scooter. Getting around Taiwan is very affordable, easy and modern.

The EasyCard in Taiwan is a prepaid card, charm, or Poke Ball that can be used as a form of payment for public transportation and convenience stores.

I’ve never been to a country with so many different options for their metro pass! Taiwan has created over a hundred different EasyCard metro passes.

The Taiwan EasyCard may appear as a Poke Ball, small bag of chips, charm, card, credit card or watch. That’s just the type, then they have varied designs that can include many popular cartoon characters. 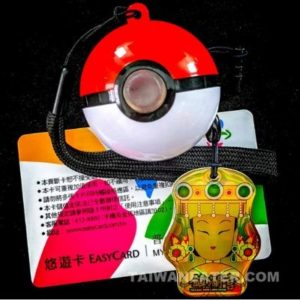 If you use the EasyCard on the Taipei metro system, you get 20% off on all Taipei subway rides!

The Taiwan EasyCard can be reloaded and every subway station and convenience stores! 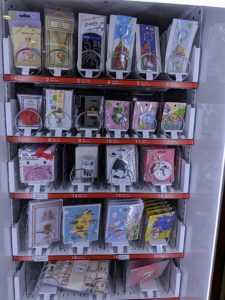 You can use your Taipei EasyCard as a form of payment on all transportation systems in Taiwan, convenience stores, boba shops and many shops and restaurants.The Taipei EasyCard is like a prepaid debit card. Since you automatically have at least a NT$100 credit on the card (for the standard), you can go slightly negative on your balance when using your EasyCard as a form of payment.Be careful though, if you lose your EasyCard, any one can use it to make purchases. There’s no verification system.If you put too much money on your EasyCard in Taiwan, you can get the balance refunded to you at any station.

The airport MRT is the easiest and fastest way to get to Taipei from TPE airport. It only costs NT$150 per ride/per person and takes you to Taipei in 35 minutes on the express and 50 minutes on the commuter train.

If you’re interested in learning more about how to use the Taipei airport MRT, Taoyuan airport train schedule I’ve created a detailed Taipei Airport Train To City guide. 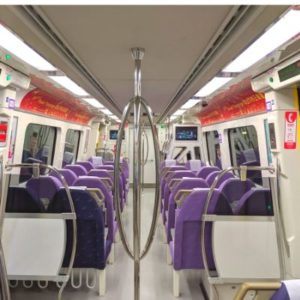 Subway: How To Use The Subway In Taipei (MRT)

The Taipei MRT makes is super easy to get around Taipei. All ride start at NT$20 and there’s a 20% discount if you use an EasyCard to pay for you trip. That makes many trips within the city as low as NT$16 (US$0.51) per ride.Getting around Taipei using the subway is super easy and very convenient. Most trains arrive every 3 minutes during the day and slow down to every 5-15 minutes later at night. The subway closes at midnight, so after that you’ll be limited to the bus, Uber or taxi to travel around Taipei. 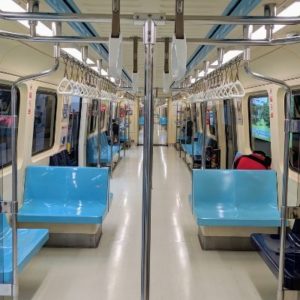 The Taipei Metro System is also very well connected around the city. Several stations have underground paths that link to nearby stations and malls. You can avoid the heat or rain by using the Taipei underground walking paths in the MRT.Each Taipei metro station has several exits for you convenience. This makes it easy to avoid traffic lights when going to your destination in Taipei. I’ve also used the metro exits just to avoid the rain and cross the street faster.

Bus: How To Use The Bus In Taiwan

Using the bus in Taiwan is extremely easy…so easy, that you’ll need an EasyCard to make it more convenient! Whenever you get on the bus swipe your EasyCard on the scanner and scan your card again when you exit.Be sure to press the “STOP” button when your stop approaches and be ready to get off the bus! I’ve seen some bus drivers just close the doors on people trying to get out because they were too slow. 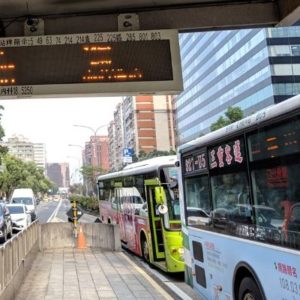 Also, I’ve seen bus drivers not pick up people because they didn’t get on the bus quick enough. Don’t be too worried though, that typically doesn’t happen too often within Taipei.Using the bus in Taiwan is actually really nice! The bus is clean, modern and has comfortable seats. Most bus stops within Taipei have monitors that tell you the estimated time of arrival for the bus. Big bonus! Google Maps even displays the location of the bus when you input your route.

Train: How To Use The Train In Taiwan

The train in Taiwan is pretty amazing because of the cost and comfort!You can take the train from Taipei Main Station to Fulong Beach and back for less than NT$180 (US$6). That’s a super affordable day trip from Taipei.When making your train travel arrangements for the Taiwan Rail (TRA), you’ll only be able to make reservations up to 14 days in advance. Reservations when using the Taiwan Rail train is HIGHLY recommended. 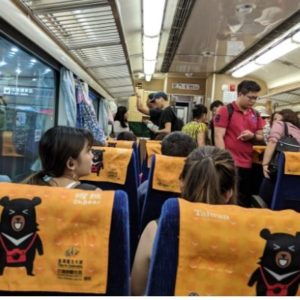 If seats are unavailable, you can still take the Taiwan train, but you won’t have a seat so you’ll have to stand.The picture I have displayed are people standing on the train. It’s not a pleasant experience since the train isn’t designed to support people standing. It’s incredibly difficult to walk through the train when people are standing, but it only really happens during holidays or on super touristy routes like from Taipei to Jiufen (Ruifang station).If you don’t buy tickets in advance, you can still just show up on any train using your Taiwan EasyCard! Just scan your EasyCard when you enter the station and scan it again when you leave.

The Taiwan High Speed Rail (THSR) is awesome! If you’ve ever been on a Shinkansen (Japan’s bullet train), the experience and quality is EXACTLY the same and at a fraction of the price.I’ve created a detailed guide on using, booking and getting discounts for the Taiwan High Speed Rail because you can save 20% off the retail rate for all non-Taiwanese citizens. 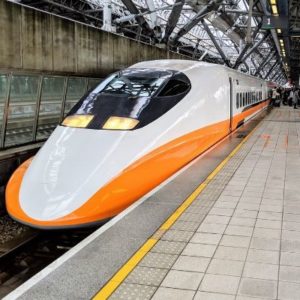 Uber in Taiwan is available in some cities like Taipei, Kaohsiung, Tainan and Taichung. Not all cities in Taiwan have Uber, so you’ll be left to Taiwan.I prefer using Uber in Taiwan because it tends to be about 20% cheaper than a taxi in Taipei.Taxis in Taipei are very reliable. You can even use the Uber app to call a metered taxi if you need one. Taxis in Taipei can be paid for with cash, credit card or EasyCard. 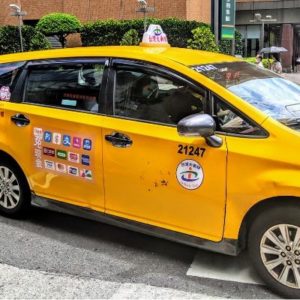 Personally, I prefer the subway in Taipei as a cheaper and faster alternative. Driving in Taipei has a lot of traffic and the traffic lights typically have you waiting for 60-90 seconds each time.

How much are taxis in Taipei?

Taxi fares in other counties of Taiwan have different starting fares. Yilan, for example, will start their taxi fares at NT$125 as soon as you get in the car.

I’m sure you might be worried about the language barrier. I don’t speak any Chinese and when I run into a taxi driver that doesn’t speak English, I just use Google Translate and Google Maps. Just bring up your destination on Google Maps and it will display the location in your language and then just below that, the location of the place in Chinese. You can show that to your driver they can take you to that location.

Are Taxis Safe in Taipei?

Absolutely! I have not been ripped off by any taxi in Taipei and haven’t heard about it. Generally, the people in Taiwan and have been very nice and honest. I’ve been in situations taxi drivers in Taipei could have easily ripped me off, but they didn’t.

Do you tip taxi drivers in Taipei?

It’s not required and not expect to tip taxi drivers in Taipei. I’ve had situations where I’ve tried to tip and they’ve returned the money saying it wasn’t necessary. Other times, I just have the driver keep the change if the fare is NT$180 and I hand them NT$200.

Taiwan is an island with smaller islands surrounding the country. Getting there by ferry is a fun and easy way.Taking the ferry in Taiwan is also very affordable and you can find some ferry routes from Daodaocheng Pier, Keelung harbor and more.You can even buy a day pass at Sun Moon Lake to get around the lake. 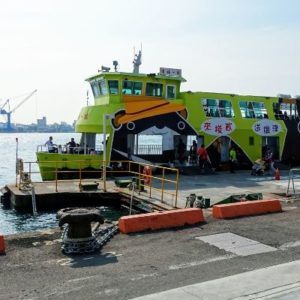 If you have an international driver’s license, you can drive or rent a scooter in Taipei. They drive on the right side of the road in Taiwan and have some traffic rules that you should know.Cars and scooters are not allowed to make right turns on red lights.You might think that cars and scooters are aggressive in Taiwan, but since there’s a lot of vehicles and people, they’re just taking any opening they can get otherwise they’ll be waiting all day. Just trust that they won’t hit you as a pedestrian. If you’re driving in Taiwan, people will also trust you not to hit them! 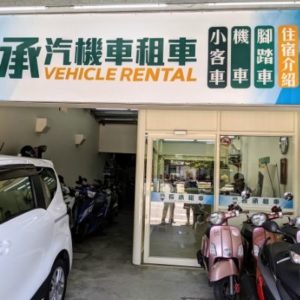 Do you need a license to drive a scooter in Taiwan?

Yes, you need a valid international driver’s permit and a driver’s license to drive in Taiwan. It’s also required to rent a scooter. The driving permit will allow you to drive only for your first 30 days in Taiwan.

Do you need a license to drive a car in Taiwan?

Yes, you need a valid international driver’s permit and a driver’s license to drive in Taiwan. It’s also required to rent the car. The driving permit will allow you to drive only for your first 30 days in Taiwan.

2 thoughts on “Getting Around Taiwan”