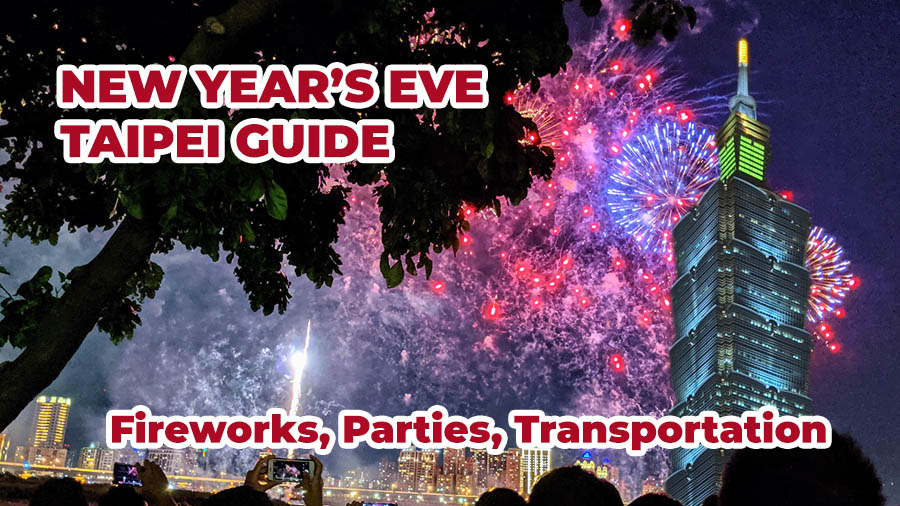 Spending New Year’s Eve in Taipei is one of the best decisions you’ll ever make. The weather is not too cold, there’s plenty of places to see the fireworks at Taipei 101 and it’s easy to get around Taipei.

Disclaimer: taiwaneater.com may get a small commission or referral fee for some of the links posted. We value your time and money and won’t waste it. For our complete advertising policy, click here. The content on this page is not provided by any companies mentioned, and has not been reviewed, approved or otherwise endorsed by these entities. Opinions expressed here are the author’s alone 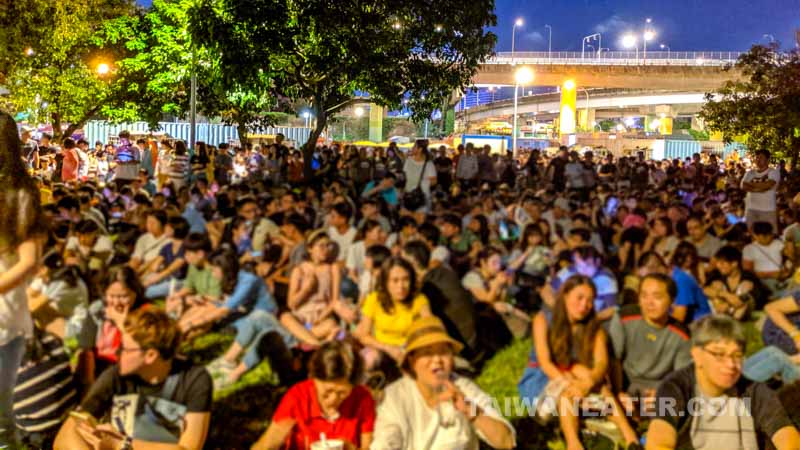 Pretty much anywhere you can see Taipei 101 is a pretty good spot. Within the city, you’ll find a lot of locations with “obstructed views” but the fireworks shoot out of Taipei 101 from all 4 directions…it will be easy to use your imagination. Check out these Google Map Links for the best viewing spots just outside the Taipei 101 Area: 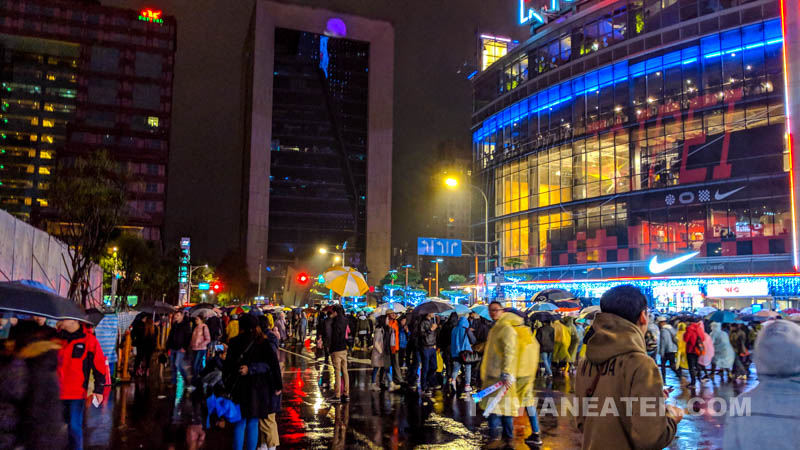 On New Year’s Eve in Taipei, the streets are completely closed to vehicles. You’ll be able to freely walk around on the roads.

In the Xinyi Area (area by Taipei 101), there’s going to be a lot of parties to ring in the new year. Most NYE parties in Taipei in the Xinyi area will have a cover charge, averaging around $100USD. I’m not sure if you want to shell out that kind of cash to be in a crowded bar with slow service.

But luckily, this is Taiwan. In Taiwan, it’s completely legal to drink alcohol on the streets. Of course you’ll be arrested if you do anything illegal/irresponsible, so drink responsibly. There will be a lot of police patrolling the streets on NYE.

Pro-Tip: You can drink anywhere in Taiwan…but be responsible and recycle your empties. 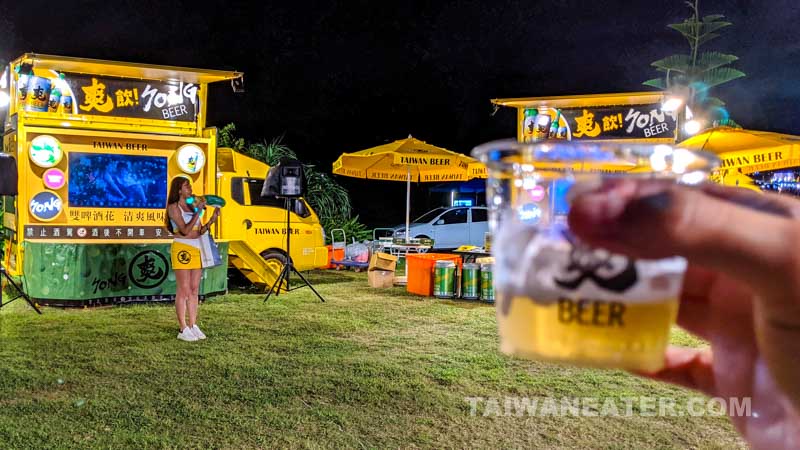 There’s a lot of hotels in Taipei where you can see Taipei 101, but the best hotels are the closest ones. The W Hotel Taipei and the Grand Hyatt Taipei offer the closest views you can get to the New Year’s fireworks celebration.

These hotels will also be hosting their own premium parties that you can attend without having to be a hotel guest. Naturally, that comes at a high price when you’re talking about New Year’s Eve in Taipei.

Where To Find Restrooms on New Year's Eve in Taipei?

So you’ve been drinking on the street now and you gotta go, luckily for you Taipei is amazing. There are no fees to use restrooms and you can find them everywhere! For New Year’s Eve in Taipei, the government brings out a lot of port-o-potties and places them around Taipei 101 for your convenience.

Additionally, you can find restrooms in convenience stores, hotels, subway stations (MRT), government buildings and the Taipei Convention Center. These facilities are open throughout the night for the New Year’s festivities.

Pro-Tip: Don’t relieve yourself on the street! Use one of the many public restrooms.

How To Get Around Taipei on New Year's?

Normally, the Taipei MRT will run it’s last train at midnight, but for New Year’s Eve it runs all night long! Unfortunately, it’s also crowded all night long. You can end up waiting over an hour just to get IN to the station. You might have a better chance using the bus, taxi or Uber.

Buses also run all night on New Year’s Eve that take you along the big city streets in Taipei. The bus only costs NT$15 (US$0.50) and it’s easy with and EasyCard. You just swipe the card when you get on the bus and again when you get off the bus.

Taxis and Uber are also available to use on NYE in Taipei. Taxis will be hard to get, but there won’t be a crazy surcharge like Uber. With Uber, expect rates to be 5x-10x the normal rates.

Luckily, Taipei is a very walkable city. From Taipei 101 to Ximen Station is an 80 minute walk. That’s not too bad. But if you’re super drunk, that’s an eternity.

What to do directly after the Taipei NYE Fireworks?

As soon as the fireworks are over, people will be leaving the Taipei 101 area. Within 15-minutes of the fireworks being over, the city begins clean up of the streets. It’s very organized and impressive. 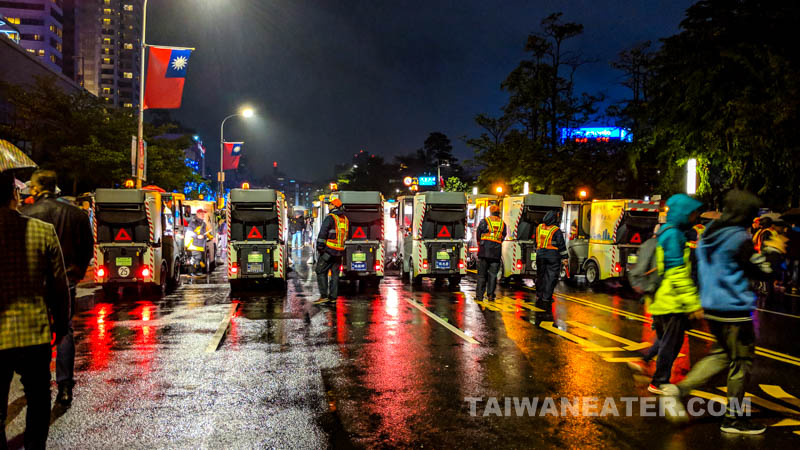 If you plan on taking the MRT, it could take hours for you to get on one of the trains. I highly recommend walking, Uber or waiting out the crowds.

In the Xinyi area, there are bars and nightclubs. If you’re looking for food, many local restaurants and night markets will still be open in the area. The Lin Jiang Night Market is a 15-minute walk from Taipei 101 and open until people stop showing up. I was here at 2am and it was very busy.

Have a safe and happy new year in Taipei!